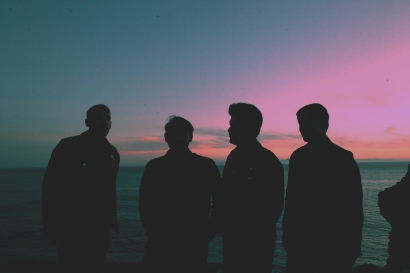 RT: Lately we have been described as West Coast alternative or New So-Cal sound. I feel like that’s a fair representation because it’s a good indicator of the laid back rock sound we offer at times.

RT: We all have bands past and present that we look up to and draw from. In addition to that, it’s probably just a lot of life experience. Love, happiness, sadness, where we grew up. Sometimes there’s no telling where it comes from. The sky, perhaps?

CH.89: What made you want to start a band and how did you come up with the band name?

RT: A few of us tried starting bands since middle school, but they just never really panned out. It’s just one of those things where you fall in love with bands and see the things they do and places they go. You can’t help but dream about doing the same thing. Watch for Horses was pulled from a Wal-Mart gardening sign that actually said “Watch for Hoses” we were desperate for a name at the time.

RT: We have yet to start a full-length album, but for an EP or a new single, it’s a matter of hashing out random ideas. Recording them. Picking the one that sounds best and then giving that one more attention.

RT: The hope is always making something that we really like and then having someone listen to it that can form a connection with the song. If the lyrics speak to a life event they are going through or if they just feel happy when they hear a particular song, that makes it all worth it.

RT: I don’t know that we live any different than anyone else. We have jobs or some of us go to school. When we aren’t doing that, we are chasing the dream. Practicing at home. Rehearsing together and writing as much as possible.

RT: It’s really whatever feels natural. It’s always had to be an organic process for us. We can’t force a song because it just hasn’t worked that way. Certainly there is some direction, but the creativity is driven from a very natural place.

RT: Persistence. Keep your eye on the goal.

RT: Maybe not of the highest importance. But it’s kind of fun to have your own sense of style and taste when you’ve been in a band for so many years.

RT: It’s probably just a matter of navigating the people who want to help versus the people who are out to exploit you for personal gain. If you can get past that, things will be a lot more enjoyable.

RT: Performing the things we create. It’s a lot of fun playing to a room and creating some kind of magic with them.

RT: I think we have a long list of bands that we all enjoy so it’s hard to narrow it down to one or a few. Anywhere from The strokes to the Red Hot Chili Peppers and The Smiths.

RT: It’s useful, but the fear is that it will take people far away from the human aspect that used to be in Music. We enjoy a good electronic song, but when it comes to rock music, things that sound too digital and processed, it’s no bueno.

RT: I would imagine it’s different but not any better than someone who chooses not to pursue a creative venture. The creativity just makes you look at things a little differently. You analyze little things and absorb them to be used as some type of inspiration later on. That might be one difference.

RT: We have only been out of state as a band twice. But one of those times we went to Seattle and we loved it. That’s our favorite right now.

RT: It means being able to feel weird and vulnerable to strangers when nobody else wants to show that side of themselves. Taking life experience and turning it into a work of art.

RT: The sound is in a place right now where it’s evolving. So it’s going to be a really exciting change. We are going to throw the paint against the wall and see what this looks like in the coming months.

CHECK OUT MORE ON: WATCH FOR HORSES