JE: Over the years I developed an abstract naive aesthetic driven by instinct versus methodology. In my studio located in Tottenham Hale in London, the meditative pauses are answered by instantaneous energetic moves. This process of making makes my works sit also in the mark-making and expressionism area. Recently I have been involving my body into the process of making and as a result, my artwork is now blurring the boundaries between canvas and sculpture.

JE: Working with instinct makes my environment ingredients. My practice, once in the studio, is to cook delicious recipes with them. I am sensitive to atmospheres, the atmosphere that I can experience passively.

JE: Recently I have been doing two months of residency at PADA Studio in a neighborhood of Lisbon, Barreiro. This new environment, an ex-industrial park immersed us in a new culture, colors, sounds, and smell. All the pictures attached are the work produced and put in a situation in a disaffected paint industry across the road.

CH.89: Can you talk a little bit about what your creative thought process is like when starting a new project/ piece of artwork?

JE: I generally start from a sparkle, as it happened in one of the previous pieces. A sparkle from a combination of shapes, colors, volumes, held momentarily in the creative balancing act. This idea is the starting point. An instinctive physical emotion.

JE: After the game start with thought-out shapes, neglected pieces and impulsive movements. It is an endless discussion between the elements. I am fascinated with just how much they have to say and I sit in front of it, like a sports commentator.

JE: People are free to sit as a spectator or as a commentator. But I would love them to lose themselves between the layers of the canvas, the shapes or the shades. Maybe they will understand the energies which drew me toward this story or maybe they will have their own. Both are brilliant!

CH.89: Can you talk a little bit about your lifestyle as an artist and what is like?

JE: I recently made a lot of change in my life to come back to a lighter, more free way of living. Now, I am conscious that all the activities/projects that I do are happening because I choose them. This lightness gives me the opportunity to have a more eclectic life. For instance, the two months of residency in Lisbon was a great way of mixing up activities.

JE: As of September, I am going to start the Turps Studio Program, an art school in south London which I am really excited about! I suppose my schedule is going to be intense juggling between the studio time and my work of interior design!

CH.89: When starting out an artistic task, do you think it is better to have a particular direction/set plan guiding your way?

JE: For me in my practice, I prefer not having a plan. Working with instinct is, in essence, my work. I like the impulsiveness and spontaneity of the decision making in my artwork and in my life.

CH.89: What is the major lesson you’ve learned as an artist thus far?

JE: Being honest with yourself. It’s hard.

CH.89: Do you regard personal style and taste to be of the highest importance?

JE: I think the personal style and the taste are the external aesthetic that people are giving others to see. Those decisions are part of who they are and will thus, influence and express ideas in a society. From this assumption, yes I think it is important. It is a way of expressing yourself which, therefore, as an artist speaking, it is necessary.

JE: The utopia of the art market in the world.

JE: Freedom; the power or right to act, speak or think as one wants.

JE: I grew up near Nice, in the south of France where my grandmother used to bring me and my sister frequently to Matisse’s museum. From his impressionist paintings to his collages, he has been one of my longtime references. I feel really amazed by his vision and sensibility toward his surroundings.

JE: Later I read ‘Concerning the Spiritual in Art’ from Wassily Kandinsky. Till this point I realized I didn’t understand what abstract art was, his theories opened my mind to another level of what is art.

JE: I am attracted by the artist which can, in their work, relate the freedom that they are experimenting with. Artist like Piero Manzoni with his ‘Artist’s breath’, the ‘Black-Light’ from Pierre Soulages, or Cy Twombly are for me, for example, masterpieces of freedom.

JE: For recent artists, I admire the playfulness of the partner Adam Frezza & Terri Chiao. Recently Martin Paaskesen and Daniel Jensen have been artists who have given me a lot of inspiration. Their work nails down the playfulness of freedom!

JE: I think it is great BUT as there is more fish in the sea, the fisherman needs to sharpen his eye.
This is what I would say, people need to constantly put in perspective and question what they see. Having the conscious of it is the key to embrace the tool.

CH.89: Do you think being an artist allows you to view the world differently from who don’t follow creative paths? 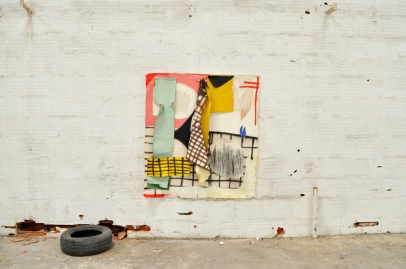 JE: Yes. I see the world as a game pitch and I play with the given elements. As my grandma’ would say, professional Calvinist, « In my life, I had the luck of never working but only playing».

JE: My favorite place is where I can regenerate myself: my dad’s garden. It’s a lush maze of different atmospheres, they all have their own pace for each moment of the day. He is an artist playing with plants and the garden is a living piece of art!

CH.89: Do yo have a favorite author or book?

JE: « Bonjour Tristesse » of Françoise Sagan has lately been my favorite book. Happening in the south of France, it’s a poetic story during a summer holiday. Her writing flows as reality, it is delightfully relaxing!

CH.89: Any furthers goals or plans for your artwork?

JE: Till now, my artwork has been either paper, painting or sculptural. Distinct from each other, the next goal is to merge them and make one whole element. With a background for interior design, conceptualizing an entire space, creating installation is probably my next move.

JE: It means that I am lucky, lucky to have the art as a prism to see the reality through. It means that it is my duty to produce work, to share a different way of seeing the world to others.

JE: ‘1964’ from Cordesfort. It’s a young French pop-rock band. I like their poetic songwriting!

CH.89: Any last word on the aesthetic of your artwork?

CHECK OUT MORE ON: JULIETTE EZAVIN