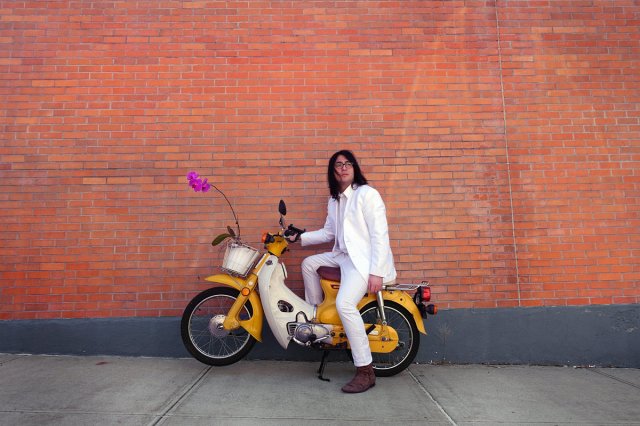 I: I struggle to categorize the style, but I try to write pop songs that often just turn into sort of indie rock tunes, and vice versa.

I: I can’t say that there’s any particular source that I draw from. Each idea that ends up becoming a song, sort of manifests itself. A melody, lyric, or rhythm will pop up in my head or in a dream, and then I just have to record it before the idea slips away. Other times it’ll just be a mood that you I’ll try to capture through some kind of rhythm.

I: I got into music, and playing music, in my early twenties. I was working in the family business fixing cars, then went to college where I studied creative writing cause I suppose I wanted as opposite an outcome than what I was on the path for…. Then a friend showed me his guitar and played the riff to Today by smashing pumpkins and I just fell in love with the instrument and it all spiraled out from there.

I: I took the name Ilithios as a way to be able to put out songs that were different from what I was doing with bands, and not feel any pressure or anxiety. Ilithios means idiot in Greek, so it sort of felt that if I owned that sort of carelessness and carefreeness, then I can create without worrying too much about what exactly I was doing.

I: With Florist, I wanted the music to have a range of emotions, hitting manic points, sad points, cocky, silly… all with total sincerity. A sort of emulation of the wide range of daily peaks and valleys that occur through any flygirl/flyguys day. I suppose if you’re like me, you don’t stay too put emotionally, so I was hoping to capture that ride while tying it all together through lyrics.

I: I don’t know that I consider anything in my lifestyle to be entirely that of an artist, but I do try to be an active participant in the art world. Supporting artists and musicians and doing whatever I can to be active in that community. My wife and I run a small DIY gallery called Cavebird Artspace out of our apartment. We host openings, film nights, or music events. Just doing our small part to make sure that there are outlets for artists in NYC.

I: Personally, I think both are equally as important. You have to listen and act on impulse and be a prisoner to that whim, but if it doesn’t happen, you have to create a plan, or anything so that you’re not just waiting and not creating. I didn’t mean that as a rhyme, but you’re welcome.

I: Always be humble. Don’t take it too seriously, but treat the creating with the deadliest of seriousness

I: Not at all! Though I am sort of spacey so I may have misunderstood the question.

I: How many people said the questionnaires? (Ha!) The hardest part for me is always fearing that I’ve already created the best work I’ll ever make. And worse still, that no one noticed.

I: I’ll say that what I love about artists in general, is the ability to create something out of nothing. Just the idea that someone can write a series of words on a piece of paper that has the ability to affect another person’s life in a profound way.

I: There are far too many that come to mind, from far too vast a range of disciplines to pinpoint.

I: But I suppose I’ll default to Linda Montano, who’s performance artwork just sort of caught me off guard and sort of unconsciously influenced me in ways I cannot intelligently explain.

I: I love that technology has the ability to give access, to creation tools that might not be readily available, to someone who has the desire to create. People making films on their phone, or music thru programming, or being able to collaborate remotely, is very exciting.

I: Sure, and probably the other way around too.

I: Absolutely. I think it’s got to be Athens, Greece. There are many different parts of it, each its own little microcosm of experiences, but it’s a beautiful city filled with art, music, food, and just the right amount of filth.

I: The City in Which I love you – Li-Young lee

I: My goal is to have my enemies become my fans.

I: Spending unemployment checks on music video props and not second guessing it

I: I would like nothing more than for it to bring you to tears and then you move on.

CHECK OUT MORE ON: ILITHIOS